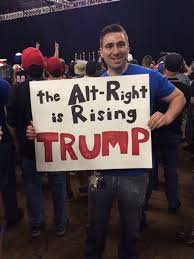 Hillary Clinton recently gave a speech and discussed the dangers of the “Alt-Right” and racism. This may be the first time many have heard of the term “Alt-Right.”  Is this just a smear campaign by Clinton towards Donald Trump and conservatives?  Is the “Alt-Right” really just a group of internet trolls concerned with free speech or is it actually an ideological phenomenon rooted in white supremacy and racism at its core?  Are the charges levied against the Trump and the Alt-Right by Clinton and the “Liberal MSM” valid?  How extensive is this movement from a domestic and geopolitical standpoint?

Donald Trump’s new ‘Campaign CEO’ is Steve Bannon, the CEO of Breitbart.com, a “news” and opinion site started by conservative Andrew Breibart, who was known for his confrontational style.  Under Andrew Breitbart’s leadership, it helped foment several political scandals during the Obama era, including the Anthony Weiner sexting incident and the ACORN videos.  Since Breitbart’s untimely death, the website was taken over by Bannon.  As popular as it is among some conservatives, Breitbart.com is not known for factual accuracy and are very agenda driven. They often politically incorrect for shock purposes, even to the point of outright racism in some of their reporting, e.g., calling conservative columnist Bill Kristol a “renegade Jew http://www.breitbart.com/2016-presidential-race/2016/05/15/bill-kristol-republican-spoiler-renegade-jew/.” Recently, under Steve Bannon’s leadership, Breitbart.com has been associated with the Alt-Right.

Perusing social media postings, one may assume the Alt-Right is mainly a group of internet trolls making tasteless, racist memes and jokes and harassing people online who disagree with them.  However, their ideological roots are tied to an international white supremacist movement with ties to Putin’s propaganda machine and was the ideological backdrop to Russia’s invasion of Ukraine.

This is a bold claim.  The forthcoming seeks to connect the dots.

Ben Shapiro, a former Breitbart columnist (who left the organization over the handling Michelle Field’s allegations of being grabbed by former Trump campaign manager Corey Lewandowski), has a good summary of the transformation of Breitbart into a ‘motley collection of white supremacists and anti-Semites’ in a recent Washington Post article https://www.washingtonpost.com/posteverything/wp/2016/08/18/the-breitbart-alt-right-just-took-over-the-gop/?utm_term=.a0b6d8c60b1d. In it, an individual by the name of Richard Spencer states that Breitbart “has elective affinities with the alt-right, and the alt-right has clearly influenced Breitbart. In this way, Breitbart has acted as a ‘gateway’ to alt-right ideas and writers.”

Who is Richard Spencer? In an article back in March of this year, Milo Yiannopolis, Technology Editor at Breitbart and outspoken Trump supporter (recently known for being banned from Twitter for inciting racist trolling of a black comedienne http://www.nbcnews.com/news/us-news/why-was-leslie-jones-targeted-trolls-n638291, but has become an alt-right ‘celebrity’ of sorts) wrote an ‘Establishment Conservative’s Guide to the Alt-Right’ http://www.breitbart.com/tech/2016/03/29/an-establishment-conservatives-guide-to-the-alt-right/.  In it, Yiannopolis cites Richard Spencer (along with other figures and sites such as American Renaissance, VDare, and so forth) as one of the foundational intellectuals of the newfound ‘alternative right’ movement. Currently, Richard Spencer runs the white supremacist think-tank called the National Policy Institute which is “dedicated to the heritage, identity, and future of people of European descent in the United States, and around the world.” The NPI also publishes a site called RadixJournal.com, which is the “news” and opinion site for the NPI. It has recently published such articles as “What the Founding Fathers REALLY Thought About Race” which begins:

“Today, the United States officially takes the position that all races are equal. Our country is also committed―legally and morally―to the view that race is not a fit criterion for decision-making of any kind, except for promoting “diversity” or for the purpose of redressing past wrongs done by Whites to non-Whites.

Many Americans cite the “all men are created equal” phrase from the Declaration of Independence to support the claim that this view of race was not only inevitable but was anticipated by the Founders. Interestingly, prominent conservatives and Tea Party favorites like Michele Bachman and Glenn Beck have taken this notion a step further and asserted that today’s racial egalitarianism was the nation’s goal from its very first days.

They are badly mistaken.”

The article goes on to cite racist views and policies that the founding fathers and other presidents held and promoted during most of our country’s history, concluding that only with John F. Kennedy do the “radical dissenters from traditional American thinking” find a president whose “conception of race begins to be acceptable to today’s standards.”

Another ‘founding’ site of the Alt-Right, according to Yiannopolis, is The American Renaissance, a monthly online magazine founded by Jared Taylor.  AmRen recently published an article called ‘The Biological Reality of Race http://www.amren.com/news/2016/08/the-biological-reality-of-race-2/’ which promotes a “theory” (if one can call it that) called Human Biodiversity.  The article runs through a gamut of racist tropes and suggests that they are all due to substantial biological differences among races.  It’s essentially Neo-Phrenology.  The fact they cite no scientific literature or research to support their claims should be a given to any rational, decent human being.

There is more evidence embedded in the other sources referenced by Yiannopolis’s introduction to this “intellectual” movement that are just as blatantly racist and bigoted, or more so. Yiannopolis, who calls Trump “Daddy” http://www.breitbart.com/milo/2016/06/19/happy-fathers-day-daddy-donald/, says these “intellectuals” have been “accused of racism” simply because their views cater to “Natural Conservatives” who are “mostly white, mostly male middle-American radicals, who are unapologetically embracing a new identity politics that prioritizes the interests of their own demographic.”  He goes on to separate the Alt-Right ‘meme-brigade’ from their racist, ideological forefathers, but asserts that these “Natural Conservatives” are who the establishment should be most concerned about, politically.

This is outright racism and white supremacy. This is a throwback to a time in American history where white men controlled all the vestiges of power in America, from government to business to even labor unions – or, as Trump may put it, a time from which his conception of American Greatness comes from. These “Natural Conservatives” are the people, after all, from whom @realDonaldTrump retweets quotes from Mussolini and photo-shopped images of Hillary Clinton with the Star of David superimposed.

Decent, rational human beings would reject this group outright based on the evidence presented above.  However, there is a further geo-political argument to be made against the Alt-Right for those concerned about America’s stance as a global superpower.

On Radix Journal’s ‘Critical Reading’ page http://www.radixjournal.com/blog/2016/8/10/critical-reading, there is section dedicated to an ideology called the Fourth Political Theory. It features four books by an author named Aleksandr Dugin. One of the books, “Martin Heidegger: The Philosophy of Another Being”, is published by Radix itself.

Who is Aleksandr Dugin? He is Russian professor (Moscow State University).  He is a propagandist for Russia’s President Vladimir Putin. His ideas have become increasingly popular within the Russian intelligentsia, having served as an advisor to Russian State Duma government officials. One of his disciples is said to be Putin’s favorite journalists. Here is some further reading about Dugin, his ideas, and his influence: http://www.worldaffairsjournal.org/article/mind-games-alexander-dugin-and-russia%E2%80%99s-war-ideas, http://www.nationalreview.com/article/380614/dugins-evil-theology-robert-zubrin.

Dugin “is the intellectual who has Vladimir Putin’s back in the emerging ideological conflict between Russia and the West. At home, Putin uses him to create a nationalist, anti-liberal voting bloc, while abroad Dugin is the lynchpin of numerous irregular networks of anti-liberal political resistance and sabotage.” He is a promoter of Eurasianism, a theory of history which sees human civilization as a conflict between Eurasia (Central Europe, Russia, and Asia) and “Atlantis” (The West.) He has “reconstructed the entire history of the world as a continuous battle between these two factions, from Rome vs. Carthage to Russia vs. the Anglo-Saxon “Atlantic Order” today. If it is to win its fight against the subversive oceanic bearers of such “racist” (so called because their values are foreign imposed) ideas as human rights, Russia must unite around itself all the continental powers, including Germany, Central and Eastern Europe, the former Soviet republics, Turkey, Iran, and Korea, into grand Eurasian Union strong enough to defeat the West.” Through this conflict, the Russian People will finally be realized, though not through conquest but in the death of Russia and the end of the world. “Death is the way to immortality.” The recent creation of the Eurasian Economic Union and the War in Ukraine (where Dugin posed with Russian tanks on the front lines) are but two manifestations of this conflict.

His Fourth Political Theory is the ideological basis that will unite the Eurasian Union. It is a combination of “Communism, Nazism, Ecologism, and Traditionalism.” Dugin founded the Center for Conservative Studies, which he uses to expose intellectuals around the globe to his theories. Through this and his speaking tours, he’s influenced New Right parties in Europe, such as the German NDP, Greece’s Golden Dawn, the Dutch Freedom Party, and France’s National Front, all of whom hold nationalist, isolationist, Fascists or even neo-Nazi political views (the European New Right’s most visible manifestation is its widespread support for the Nigel Farage-led Brexit referendum.  Nigel Farage, of the British Independence Party, recently appeared at a Trump rally in support of his candidacy https://www.theguardian.com/commentisfree/2016/aug/26/nigel-farage-brexit-hero-donald-trump.)  His internet presence is bolstered through American white supremacist sites, e.g. Radix Journal. If one doubts the connection between the American Alt-Right, Europe’s New Right, and Dugin, in 2014, Richard Spence himself held a European “Identitarian” Conference, hosted by the Polish far-right Jobbik party, where Dugin was invited (but was denied a visa to attend.) On the invitation, Spencer exclaimed “I think the fact that we’re inviting Dugin is expressive of the fact that we want to have a real healthy dialogue with the major currents of Russian conservatism.” https://www.buzzfeed.com/rosiegray/american-white-nationalists-to-hold-conference-with-russian?utm_term=.ywNdyvN90Q#.bpjN3kVJZA

Note, also, that Richard Spencer was at the Republican National Convention inviting attendees to talk to a racist http://www.slate.com/blogs/the_slatest/2016/07/20/richard_spencer_at_the_rnc.html.  Further, Geert Wilders, leader the far-right Dutch Freedom Party mentioned above, attended the Yiannopolis rally at the RNC, and posed with GOP congressmen for pictures https://www.thenation.com/article/why-dutch-far-right-extremist-geert-wilders-has-come-to-cleveland-to-cheer-on-donald-trump/.

These are the people who now find home in the GOP that Trump is attempting to mold. It may be political opportunism, capitalizing on a movement using language different from establishment conservatism and liberalism.  It’s doubtful that the Alt-Right online trolls are actively participating in Putin’s propaganda machine.  However, it is telling that Trump has put at the head of his campaign someone who runs a media outlet who the racist Alt-Right has credited for its recent popularity. Trump has openly questioned the necessity of NATO, who Putin sees as its main threat to his Eurasianist vision.  Trump has even stated that he wouldn’t intervene to protect NATO allies if Russia invaded, which plays right into Putin’s hands to regain political control over eastern Europe.  It is no wonder Russia’s media outlets are so pro-Trump.  And there’s difficult to deny the foundational ideological synthesis between the American Alt-Right, European New Right, and Russian “conservatism” promoted by Dugin. Trump’s nativist, nationalist, protectionist, and “law and order” rhetoric is music to the ears of both this international white supremacist Alt-Right insurgence and America’s geopolitical foes abroad. They all have common cause, to fight Western pluralistic, multi-cultural “liberalism.”

Husband and dog father.  Rust-belt Midwesterner trying to survive in the desert.  When I’m not wasting time on politics and sports, I work to ensure healthcare information systems are working as designed. 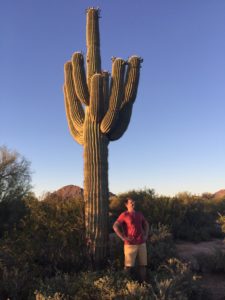