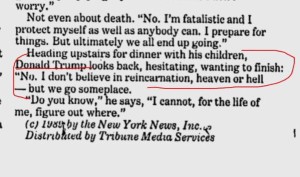 Earliest doctrine of the Christian Church dating to the 4th Century

I believe in God, the Father almighty,
creator of heaven and earth.

I believe in Jesus Christ, God’s only Son, our Lord,
who was conceived by the Holy Spirit,
born of the Virgin Mary,
suffered under Pontius Pilate,
was crucified, died, and was buried;
he descended into hell.
On the third day he rose again;
he ascended into heaven,
he is seated at the right hand of the Father,
and he will come to judge the living and the dead.

I believe in the Holy Spirit,
the holy catholic and apostolic Church,
the communion of saints,
the forgiveness of sins,
the resurrection of the body,
and the life everlasting. Amen.

This post is primarily directed to Evangelical Christians, of which I consider myself one.  I do not write this post lightly.  As a rule, I do not judge a person’s beliefs.  I recognize in this nation, one’s faith, or even the lack of it, is not a qualification to hold public office under the Constitution.  No one spoke louder than I did in 2012 objecting to the criticisms of the faith of Mitt Romney.  However, when one drapes himself in the mantle of a faith and panders to its faithful as one its own and uses it as a basis of your credentials for the office of President, you have made yourself and your beliefs the subject of valid criticisms.

Today, he posted a video wrapping himself around his childhood Bible and holding himself to Evangelicals as one of their own and promising that he would be there for them.  That was it for me.  It’s time to review the record of Donald J. Trump.

Throughout the campaign, Trump has tried to wrap himself around his mother’s famous pastor Dr. Norman Vincent Peale.  He has repeatedly talked about the importance of his faith and family despite a history of broken marriages and extra-marital affairs, but well, at he least he doesn’t drink ….. And surely this is the voice of a godly, Christian man “You know, it doesn’t really matter what [the media] write as long as you’ve got a young and beautiful piece of ass.” — from an interview with Esquire, 1991.

He can’t recall a favorite verse from the Bible because it’s “too personal” when being interviewed by Bloomberg magazine.  However, when interviewed by the Christian Broadcasting Network, he recalls his favorite as “Never bend to envy” – a non-existent verse.  When asked if he has ever asked God for forgiveness, he didn’t see the need.  “I like to be good. I don’t like to have to ask for forgiveness. And I am good. I don’t do a lot of things that are bad. I try to do nothing that is bad.”  Now, when I read my Bible, it’s pretty clear:

His claim is a denial of a fundamental tenet of the Christian faith.  He further mocks the notion of the need for forgiveness by the trivialization of Holy Communion.  “When we go into church — and when I drink my little wine, which is about the only wine I drink, and have my little cracker — I guess that is a form of asking for forgiveness. I do that as often as possible because I feel cleansed, OK?”

Narcissism was never a value preached by Christ in the sermon on the mount.  Jesus never taught against the evils of political correctness.  He did, however, condemn selfishness, vanity and extravagance.

If that wasn’t enough, he has denied the essence of the faith with his own words.  In an interview with the Chicago Tribune published March 12, 1989, Donald Trump made clear he does not believe in Heaven or Hell.  That is a denial of the Apostolic Creed, which is the historic statement of faith for Christianity.  In short, he is not a Christian.  He is committing a fraud upon the faithful.

Yes, I know.   You’re afraid.  The world changing.  The family is under attack.  Our faith is under attack.  Radical Islamic terrorists want to kill us.  We have a President who have been feckless in foreign policy.  We have a government that is out of control and economy that is going nowhere and you feel like no one is doing anything about it.  You feel like we have to have someone strong – even if we don’t agree on everything.

Times like these call for faith.  In whom do we place our trust?  In the days of the judges in Israel, the people were convinced they needed a strong man.  They needed a king!  Samuel tried to warn them:

He said, “This is what the king who will reign over you will claim as his rights: He will take your sons and make them serve with his chariots and horses, and they will run in front of his chariots. Some he will assign to be commanders of thousands and commanders of fifties, and others to plow his ground and reap his harvest, and still others to make weapons of war and equipment for his chariots. He will take your daughters to be perfumers and cooks and bakers. He will take the best of your fields and vineyards and olive groves and give them to his attendants. He will take a tenth of your grain and of your vintage and give it to his officials and attendants. Your male and female servants and the best of your cattle[c] and donkeys he will take for his own use. He will take a tenth of your flocks, and you yourselves will become his slaves. When that day comes, you will cry out for relief from the king you have chosen, but the Lord will not answer you in that day.”  I Samuel 8:11-18

When we compromise our values, we pay a dear price.  The strong man only wants power for himself.  He says that when he is President “Christians will have power” (something he has no ability to deliver).  Satan offered that to Jesus.  Jesus knew to reject it.  He is not one of ours.  He is a fraud. Worse, he panders to hate.  How is this behavior consistent with the teaching of Christ?  The message of Christ is always love and hope, not anger and hate.

In a move seen coming for some time, the International Anglican Communion voted to suspend the American Episcopalian Church for three (3) years.  The move has been threatened for a number of years as the Episcopal Church has made itself more open to the gay community.  While the Church of England, Church of Scotland and the Episcopal Church all had ordained gay priests, the issue was still divisive within most of the communion and came to a head in 1999, when the Church of England ordained an openly gay bishop.  After investigation, the Archbishop of Canterbury ruled that consecration of people in same sex relationships should cease.

In response to the Supreme Court’s landmark decision in Obergefell v. Hodges, which immediately legalized same sex marriages nationwide, the Episcopal Church voted in July 2015 (effective November 1, 2015), after contentious debate, to permit same sex marriage and created new rites which were gender neutral – although as a compromise priests would not be compelled to perform same sex unions.

The churches formed from association with the Church of England, which was formed by King Henry VIII when he broke with Rome when Pope Clement VII refused to grant Henry an annulment in his marriage from Catherine of Aragon.

More on the Suspension from CNN 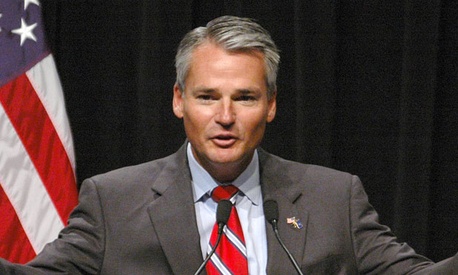 Today Chaffetz said, “Marco Rubio is a conservative leader who understands the challenges facing American families in the 21st century. I’m looking forward to hitting the campaign trail with Marco to talk about the future of our country and the importance of electing a next-generation conservative in 2016.”  With Chaffetz’s endorsement, the entire Utah house delegation has now endorsed Marco Rubio.

Chocola stated yestreday, “”I am proud to support Marco Rubio, a strong fiscal conservative and living testament to the American Dream.”