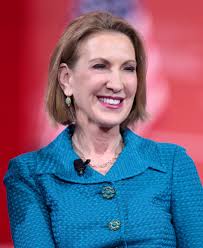 Carly Fiorna sat down with NBC’s Chuck Todd and discussed Hillary Clinton.  While expressing admiration for Clinton, she criticized Clinton “lies” on Benghazi, emails and the server.  When Chuck Todd challenged her and asked how she knew she was lying, without batting an eye, Fiorna replied, “Oh for Heaven’s sake” and proceeded to explain what we now know about the Benghazi chronology.

Todd also asked her about the controversy surrounding the 14th Amendment and Donald Trump.  Her reply was just as sharp.  “He may not be a politician, but he sure is acting like a politician.”  She referred to the 14th Amendment issue as a “bright, shiny object” to distract from the real issues – securing the borders and reforming immigration.

Fiorna on NBC’s Meet the Press